Mad Women for a Change

Last night I was invited to a terrific party hosted by Ken Roman, former chairman of Ogilvy. The occasion was the debut of a new book by the wonderful creative director and writer Jane Maas. It’s called “Mad Women” published by St. Martin’s Press.  The book takes a fun and honest look at what it was really like for women in ad agencies in the sixties and seventies. Was there really that much sex?  Were women relegated to the steno pool, no matter their ambitions and talent? Jane’s book says, yes and even more so than in the Mad Men series. She interviewed me for the book, not because I was one of those women (I was in grade school!) but because my mom worked in ad agencies throughout those decades. For the record, my mom did her share of typing and shorthand but thankfully avoided the seamier side of the inter-departmental relationships that Jane vividly describes.

In her book, Jane retells my story of how I grew up at a dinner table where storyboards and media plans were normal conversation. My mother loved working in advertising, certainly more than cooking dinner. She once worked for an agency where the Campbells soup account came under fire for exaggerating the pile of vegetables in a soup shoot, so she was in charge of counting exactly how many string beans, peas and carrots were in a can and verifying that the bowl was ‘honest’ before the cameras rolled. I love that she loved her work and she inspired me to follow in her footsteps. Not that it was as racy as the TV drama but advertising did bring out the crazy in a lot of people.

Jane is headed out on a 40 city tour, (OMG!) and having done it myself, I wish her a lot of great applause, as many flight upgrades as she can get and a good night’s sleep or three. 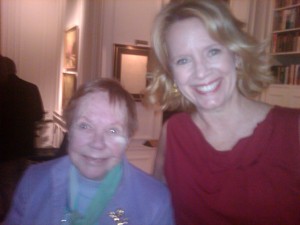