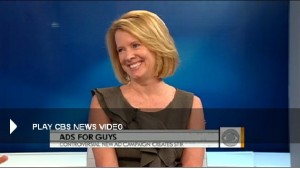 You know how we feel about the commercials for Dr.Pepper Ten (Don’t remember? Then click here), and their particularly subtle “Not for Women” tagline, but how about their larger campaign, including their Facebook page? Mary Lou Quinlan appeared on the CBS Early Show this morning to lend her insight to the latest ad campaign making internet waves.

It must be the month of awesome laundry product campaigns. Hot on the heels of Tide’s confessions, Cheer has broken out the big guns by sponsoring the video for band Strange Talk’s single Climbing Walls.  But it’s not a deluge of product placement (we’re looking at you, Britney)—it’s a series of interactive pop-ups, where colorful items are highlighted and, once clicked on, bring the viewer to the brand’s Facebook page to enter giveaways for the clicked-upon items. Fun!

It’s also worth mentioning that this just may be the most Gen Y-targeted campaign for a Gen X product we’ve seen of late. Cheer detergent makes you think of immaculately-coiffed housewives laundering their children’s soccer-stained uniforms, not vibrant Passion-Pit-meets-Foster-the-People indie up-and-comers brimming with energy and amps. Not to mention surrounded by fantastic choreography, because there’s that, too.

Cheers to Cheer (forgive us, it was too easy) for walking the walk and imbuing their brand with the color and energy they offer to consumers. And, move fast – a new round of giveaways starts August 31st, 3pm EST.

God Save My Shoes Trailer: Louboutin, Blahnik, and Quinlan 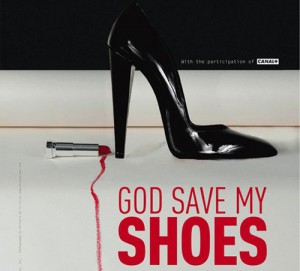 How many pairs of shoes do you have? My husband has about 25 and I have about 60, but according to today’s New York Post, Beth Shak has 1,200 pairs. And not just any shoes. We’re talking Jimmy Choo, Walter Steiger, Manolo Blahnik and 700 pairs of Christian Louboutins valued at $500,000. She’s a poker pro who spends every dime of her winnings on her feet.

Her story will appear in an upcoming documentary called “God Save Her Shoes”—which also features Fergie of the Black Eyed Peas, Destiny’s Child Kelly Rowland, and every famous shoe designer on earth and… me! The film, which takes a cheeky and fascinating look at women’s shoe obsessions, will debut in September in Paris during Fashion Week.

Director Julie Benasra asked me to weigh in on the psychology of why women feel the way they do about their shoes. At one point during the filming in my office, I noted that you can tell a lot about a woman by the shoes she keeps under her desk. “What do you mean?” I ducked underneath and surprised even myself when I pulled up six pairs, each serving a purpose, from fast city walking to just strutting my stuff.

Armchair psychology? Not when it comes to shoes. Like every other woman, I walk the talk. Catch the trailer below and watch for the US premiere!