How Do You Diffuse Office Bullying? Mary Lou Quinlan On The CBS Early Show 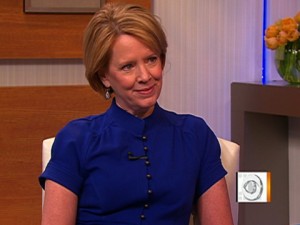 “It’s not the screaming in the conference room. It’s the sabotaging of ideas when no one else is there. That’s a little scarier.”

Is work feeling a little like high school lately? We’re not surprised– a new survey by CareerBuilder.com found that over a quarter of the 5,000 respondents had been bullied in the workplace. Chris Wragge of the CBS Early Show discussed this disturbing pattern with Just Ask a Woman Founder and CEO Mary Lou Quinlan.

Find out from Mary Lou why women are the more common victims of bullies and whether you should confront a workplace bully HERE.

by Jean Crawford
Published May 26, 2010 in Fashion

I started giggling while reading Vanity Fair, and it wasn’t because I was staring at Cristiano Ronaldo’s beautiful abs.  It was the intro to The 60 Minutes/Vanity Fair Poll. VF admitted in a sassy tone that they could not believe the results of their own telephone interviews; “for anyone looking over the results of our most recent poll, in which some of the answers seem to be, frankly, inside out”.  They go on to summarize some of the findings with such comments as, “we would have predicted the opposite…counter to our expectations…we’d venture that those proportions would be reverse.” And concluded with, “how would we know for sure?”

I love Vanity Fair. I know they’re smart and I applaud them for being bold enough to publicly question the results of their survey. I don’t believe that 9 in 10 Americans tell their doctors the absolute truth about everything either. But when clients ask why we so strongly believe in qualitative research versus quantitative I feel like I have some new support in my back pocket now. It’s in the follow up question, even if it just a “really?” which I believe this polled lacked. It’s the way she crosses her arms, averts her gaze, even laughs after saying something out loud to your face, the body language, the way she interacts with the other women in the group.  Not blindly answering questions on her cell phone while cooking dinner, painting her toenails or watching TV. Why do we believe in qualitative research? So we can see the Whole Truth.

That huge thud you’ll be hearing on Superbowl Sunday won’t just be a running back slamming onto the field. The heavy hitting may be thrown between the plays when CBS runs its various “advocacy spots“. “Advocacy ads are a good way to get a point across” is a Half Truth. The Whole Truth is that they’re “good” when it’s your POV they’re espousing.

The first salvo came with the Focus on the Family group’s entry in support of the pro-life movement featuring Florida Gators quarterback Tim Tebow and his mom. Once the word got out that they had bought time, women’s groups pounced and pro-life folks defended. CBS, which has barred advocacy spots in the past, decided to take a pass and allow opposing or alternative advocacy spots to pay up and buy their own spots.

So perhaps over the coming two weeks, when we ought to be raising money for Haiti or just saving money to pay our healthcare bills, we’ll be tapped to pony up to pay for Superbowl spots for one side vs the other, fueling a cause against cause free for all in a living room near you.

What worries me about this is two things: 1. that while abortion affects all of us, it’s largely a women’s issue. In recent years, the NFL has crowed about their growth in female viewers and advertisers have been going for it ever since. But now a “women’s” issue will plop onto the coffee table, next to the nachos and beer and somehow I feel that women will be the losers who ruined the fun of watching the game or caused fistfights over issues instead of touchdowns.

And I also worry that maybe there are some parts of our hectic and pressured lives that deserve to be left alone. There are only a handful of programs that gather as many people together for a good time. The Superbowl. The Oscars. The finales of American Idol, Dancing with the Stars and 24. Throwing this important and inflammatory issue into the center of what should be a small oasis of family and friend time, seems like ambush marketing in its worst form. And the marketers who paid their few and hard earned dollars to place a spot about Clydesdales or Doritos in a game that’s just been scrubbed after its own tussle with a wardrobe malfunction—should speak up about the damage to the brand that spills onto their messages. The Superbowl brand isn’t the same if it’s turning the playing field into a political bloodbath. Thud.