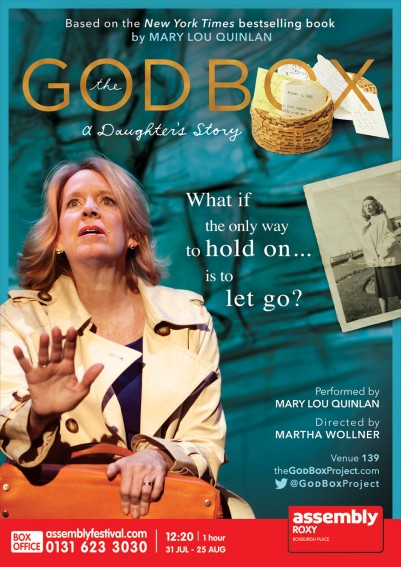 Losing my parents was the heartbreak of my life. But I feel that they left me a gift, first in my mother’s God Boxes of notes but also in the grit and hope they instilled in me as a girl. I had always dreamed of a career in theater but instead poured my years into a business career. But after losing Mom and Dad, I decided I wanted to share their story, not only in my book but onstage.  I started from scratch, at the bottom, at a sad point in my life. But their belief in me gave me courage. And my partnership with the amazing actor/playwright/director Martha Wollner gave me the skills. After many U.S. performances raising nearly $250,000 for charities, now the show is stepping up to a world stage. From July 31 to August 25, I will be performing ‘The God Box, A Daughter’s Story’ at the world-renowned Edinburgh Festival Fringe. It was an honor to be accepted by the famous Assembly Theater there. A new journey is beginning. But I’ll pack my bags with Mom and Dad’s love inside.  Come along with me as I share the next few months of the dream of a lifetime.